The smallest town in the world
;

Discover the magical inland of Istria, the largest peninsula on the Adriatic coast. Explore the green hills and valleys and lovely acropolis towns of Istria. Make sure to visit Hum, the smallest town in the world! This lovely walled town will amaze you with its long history and rich cultural heritage.

What to do in Hum

How to get to Hum

Where to eat in Hum

What to visit in Istria

Istria is the largest Croatian peninsula and the largest peninsula in the Adriatic Sea. It is known as Little Italy because, for many years, Istria was under Italian rule. This left a great mark on the architecture of the peninsula, as well as on the people of Istria. Along with the rich history and beautiful sea and nature, Istria is full of lovely little towns built in stone. The most well-known cities of Istria are those on the coast – Pula, Rovinj, and Poreč. But there are also several lovely towns located in the inland of the peninsula.

Legend has it that giants lived in Istria long before humans and they are held responsible for the appearance of the entire peninsula. The biggest of Istrian giants was the one named Dragonja. He plowed a furrow through which the river then flowed, the one he called Mirna. Later, he made another furrow for the river he named after himself – Dragonja. And the Pazin Cave was formed when he stomped his foot in anger and the ground opened. Each giant then took one hill and made a small town on it. And so were formed Grožnjan, Roč, Završje, Motovun, Sovinjak, and Vrh. According to the legend, giants built Hum from rocks left after building other acropolis towns in the river Mirna valley.

Hum is regarded as the smallest town in the world. Although having just 20 inhabitants, Hum contains all the administrative facilities and public affairs and has its own mayor. It is also one of the most important Glagolitic centers. 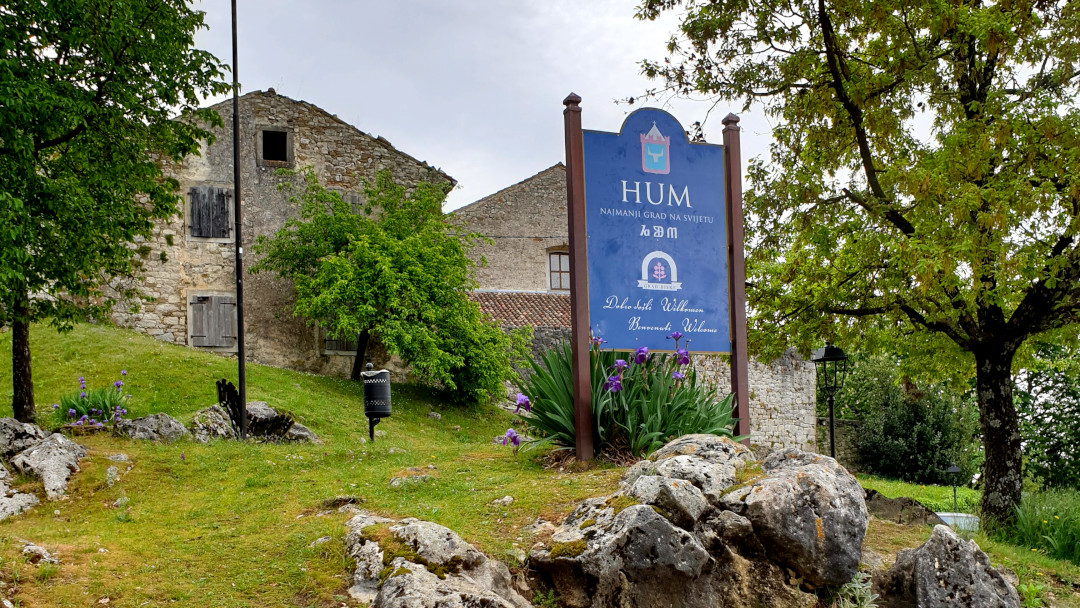 The town of Hum is located in the central part of Istria, a peninsula in the Adriatic sea, in Croatia. Hum is about 2h30 by car from Zagreb, 1h from Rijeka, and 2h from Ljubljana.

What to do in Hum

The acropolis town of Hum

Hum is one of the few preserved examples of urban development exclusively within the city walls. The city walls enclose an area of ​​rectangular shape, about a hundred meters long and about 35 meters wide. The urban core of the town, with fortifications, town gates, and the first row of houses, was built in the 11th century. During the entire millennium, to this day, almost nothing has been built outside the city walls. The settlement has remained within the boundaries set in the early Middle Ages. 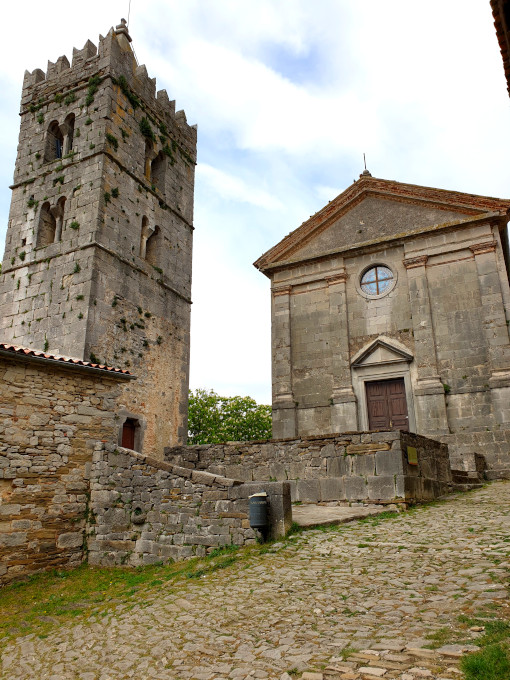 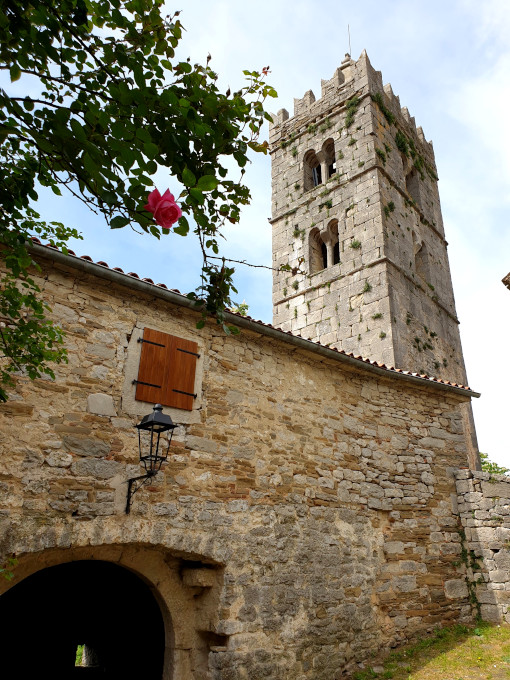 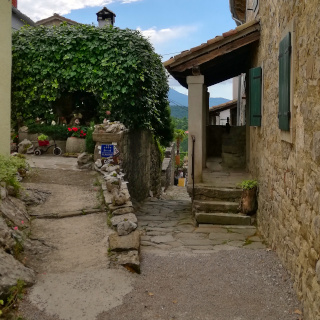 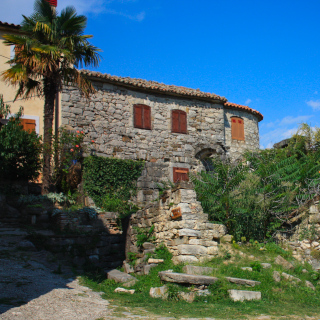 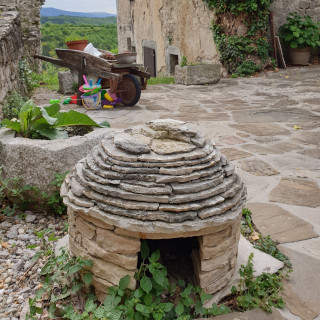 Hum Castle (Kaštel) was located on a plateau within the defensive walls, on the site of today’s parish church. The main purpose of the castle was defensive, but, especially in the earlier period, it was also the seat of feudal lords. A settlement was gradually built next to the castle. Its defensive role dictated a closed system of walls that surrounded it and such a plan of the city that allowed the fastest connection of each of its parts with the castle, in which the inhabitants took refuge in case of danger. The spatial organization of the town consists of three parallel rows of houses that stretch from east to west, two streets that separate them, and a trapezoidal square by the main city gate.

Over the years, Hum was often damaged in conflicts and raids. Its fortification system, including the castle, was repeatedly demolished and rebuilt. In the 17th century, after the city burned down, a reconstruction followed. Today’s appearance of Hum was completed at the beginning of the 19th century with the construction of the parish Church of the Assumption of the Blessed Virgin Mary, which today has a central position in Hum.

When visiting Hum you don’t need more than 20 minutes to explore the whole town, but there’s a special atmosphere this stone-built acropolis provides. Almost a magical feeling! 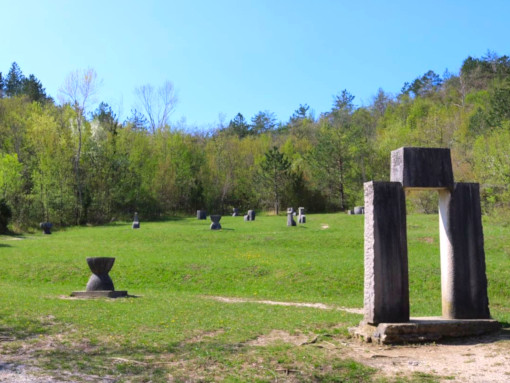 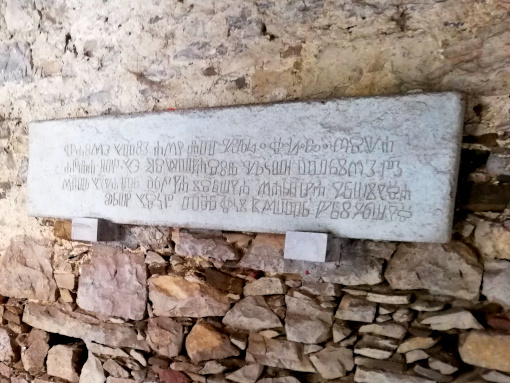 Hum is known as one of the main Glagolitic centers in Croatia. The Glagolitic script is the oldest Slavic alphabet. It was created by Byzantine monks, Cyril and Methodius, in the 9th century. The two monks were sent by the Byzantine Emperor to spread Christianity among the Slavs in the area. The idea was to translate liturgical books into the contemporary Slavic language understandable to the general population. As the words of that language could not be easily written by using either Greek or Latin alphabets, they invented a new script which was based on the local dialect of the Slavic tribes. Croatia was one of the main strongholds in the use of the Glagolitic alphabet. The Glagolitic alphabet was preserved in Croatia until the early 19th century.

Visit Hum with a private guide

If you want to visit Hum, get in touch and book a day trip with a private escort guide in english or other language!

How to get to Hum

Hum is only accessible by car. Since the town is located in central Istria, out of reach of major roads, the buses don’t make a regular stop here. If you are interested in taking a bus, check out Brioni Pula, the main Istrian bus operator, to find the nearest bus stop available connected with your starting point.

How to get to Hum from Rovinj

How to get to Hum from Pula

You will need approximately 1h15 to get from Pula to Hum. First, get on the motorway (direction Rijeka/Umag). At the Kanfanar junction stay in the right lane and follow signs toward Zagreb/Rijeka/Pazin. Next, follow the motorway in the direction of Rijeka/Trst. Take the exit towards Lupoglav/Trst/Buzet and continue following the instructions on the road until you reach your destination.

How to get to Hum from Zagreb

Hum lies about 2h30 from Zagreb when coming by car. First, get on A1 motorway and keep following the instructions on the road in direction of Rijeka). After you pass Rijeka, take the right exit towards Pula/Pazin/Opatija and continue straight. Next, take exit 6 (Lupoglav) towards Lupoglav/Trst/Buzet. Turn left and then right, and continue following the instruction on the road until you reach Hum. 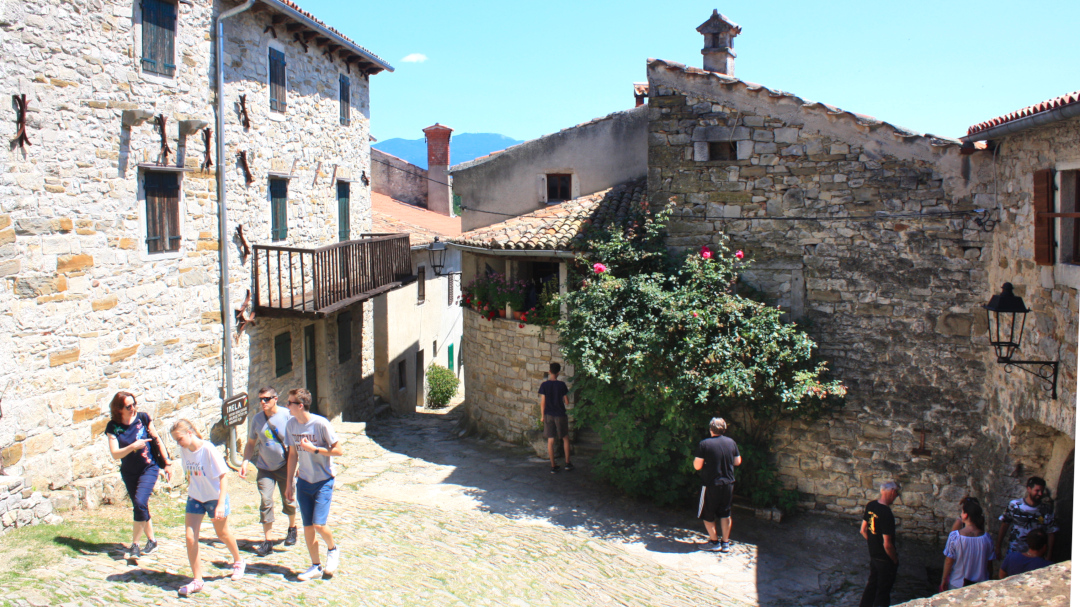 Where to eat in Hum

Istrian cuisine is as good as Istria is beautiful! Although they are both a variation of the Mediterranean cuisine, the traditional food of Istria differs from the Dalmatian cuisine. Fish, squid, asparagus, truffles, pasta, and Istrian pršut (prosciutto) are just some of the traditional dishes of Istria.

Konoba Hum is the only restaurant in Hum. It is a traditional Istrian tavern, decorated in the original Istrian country style. The tavern serves typical local dishes, such as homemade pasta, truffles, mushrooms, asparagus, homemade soups and stews, Istrian beef, Istrian prosciutto, sheep cheese and cheese with truffles. The food is accompanied by a selection of local wines, Teran and Malvasia, or by a traditional Istrian aperitive.

While in Hum, don’t miss a chance to visit the House of Biska, one of the Aura Distillery shops. Biska is a traditional Istrian brandy, prepared from komovica (a type of rakija), mistletoe, and three types of herbs. It is traditionally prepared in Istria, and the original recipe is about two thousand years old and dates from the time of the Celts who lived on the Istrian peninsula. This recipe was found written in the Glagolitic alphabet, and since then biska has been prepared in its original way all across the peninsula. 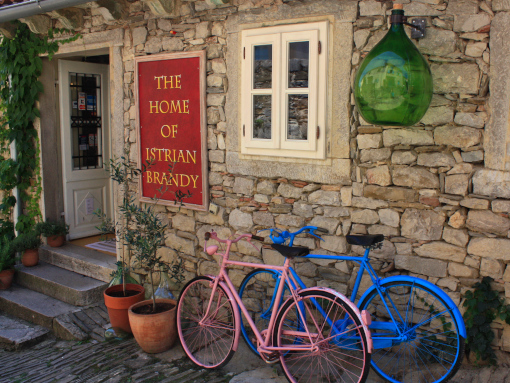 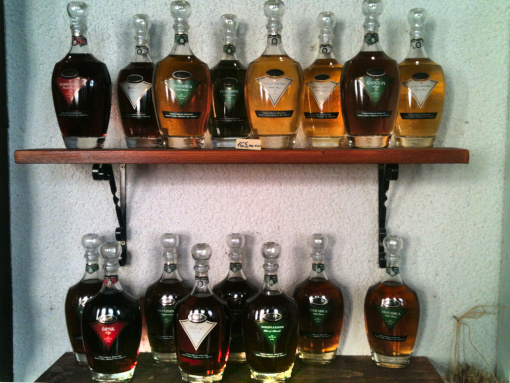 Central Istria is full of wine-growing hills. The most famous wines produced in the area are Malvasia, Teran, Merlot, and Muscat. The history of wine in Istria is a story that lasts for almost 2000 years since the Roman emperor Marcus Aurelius brought the first vine to the peninsula. Numerous wineries offer wine tastings and visits to their vineyards and cellars.

What to visit in Istria

Motovun is one of many acropolis towns scattered throughout the Istrian peninsula. It is also the most famous and most visited Istrian acropolis, due to the Motovun Film Festival that takes place in the beautiful scenery of the town every summer. The medieval fort of Motovun, along with the city walls, hides many surprises. Apart from the unique architecture, the town offers an incredible panoramic view of the green Istrian inland. The town is a great place to visit if taking a tour through the peninsula, or as a site for a lunch break. 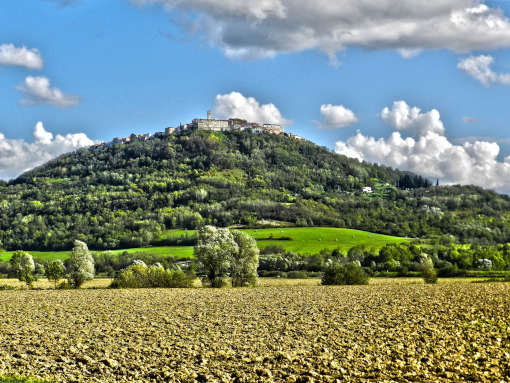 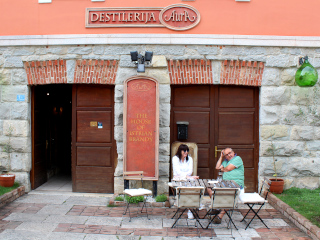 Buzet is a lovely little town placed on a hill above the valley of the Mirna River. The town is known as the town of truffle, unique fruit that grows on the peninsula. Truffles can mainly be found in the dense forests surrounding the medieval towns of Motovun and Buzet. There’s a possibility to try your luck in the truffle hunt with the help of trained dogs and a professional guide. Buzet is also home to Aura Distillery, a company that produces exclusive products such as brandies, jams, and other traditional products. Apart from the shop where you can buy these products, you can also visit the distillery and get to know the process behind the products. Tastings are also included in the tour.

The city of Rovinj is one of the most beautiful cities in the Adriatic Sea. The old town, which is nowadays a popular tourist destination and a monument of culture, was first situated on an island, which as later connected to the mainland and turned into a peninsula. The old town of Rovinj is a typical Mediterranean town, crowded with narrow stone houses, narrow streets and small squares, all of which make it a lovely and picturesque town it is today. The Church of St. Euphemia dominates the peninsula, along with its bell tower, as it rises above the houses and the roofs. 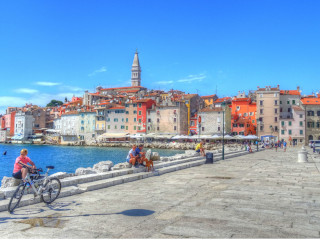 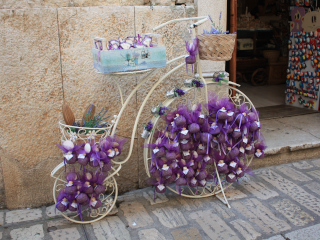 Another historical town on the Istrian coast and another popular tourist destination is Poreč. The city of Poreč is most widely known for the 6th-century Euphrasian Basilica, one of the several UNESCO World Heritage Sites in Croatia. Alongside the magnificent basilica complex, there are several other sights in the historical center of Poreč that are worth a visit. The inevitable Mediterranean architecture and traditional Istrian restaurants and souvenir shops are yours to be explored.

Pula is the largest, and, architectonically speaking, the most interesting town in Istria. The city of Pula is one of the oldest Croatian cities on the coast. Inhabited ever since the prehistoric times, Pula became an important Roman colony and port on the Adriatic Sea at the time of the Roman Empire. Until this day, the historical center of Pula houses several Roman buildings, all in perfect condition. Some of those are even among the best examples of Roman architecture in the world, such as the famous Arena Pula, a beautiful Roman amphitheater. 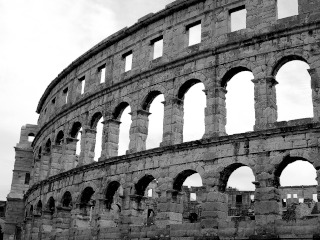 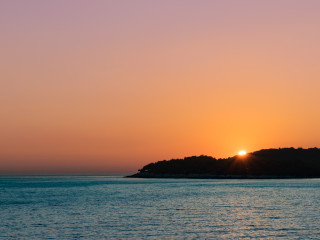 From the town of Fažana sails out the boat to one of the most beautiful sites in Croatia – the Brijuni National Park. The Brijuni is a group of islands famous for its natural beauty and for being the Summer Residence of President Marshal Tito. Today, the Brijuni National Park houses several hotels, a safari park with exotic animals, several archeological sites from different historical periods, a museum and an educational center. The ticket for the national park includes a boat ride, touristic train, and a local guide.

Marzito organizes day-trips or transfers to Hum from Rovinj, Pula, Zagreb, or any other town. Explore our offers here.

For more information and offers, feel free to contact us!