Looking to discover the treasures of Bosnia? Here, you will find the best of Bosnia and Herzegovina tourism. With the information and inspiration below we are sure you will be able to plan your vacation the best way possible!

Check out our selection of the best places to visit in the country.

Before traveling to Bosnia, make sure you are well prepared.

What to visit in Bosnia and Herzegovina?

The list of the top destinations in the country should help you plan your perfect itinerary.

Sarajevo is the largest city and the capital of Bosnia and Herzegovina. The city is a real melting pot in the region. The population of the city is combined with different ethnicities and religions. In Sarajevo, Bosnians, Croats, and Serbs, as well as Muslims and Roman and Orthodox Catholics live in harmony. Because of its cultural and religious diversity, Sarajevo is sometimes called the “Jerusalem of Europe”. It is considered a “place where East meets West”. The city of Sarajevo is also a city of long and diverse history. It has played a significant role in some of the biggest events in Europe’s history. So, visit Sarajevo and discover for yourself all the historical sites of the city. 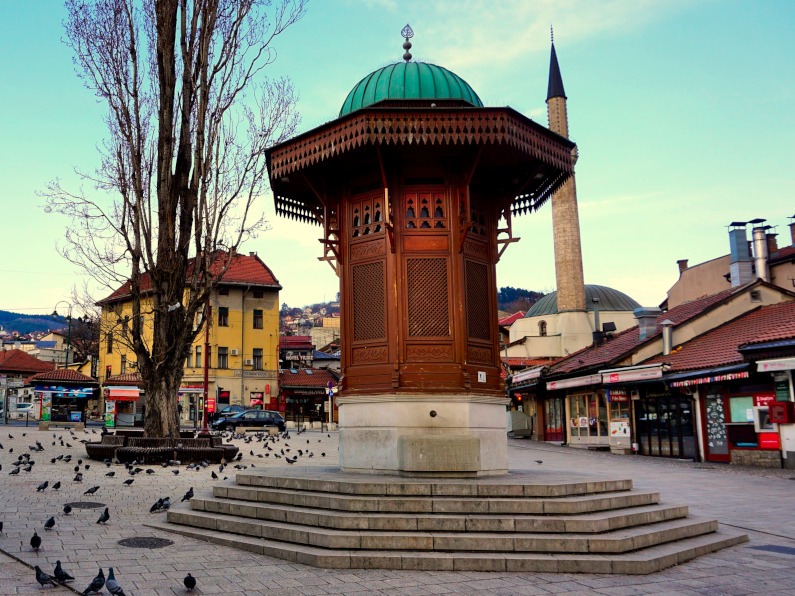 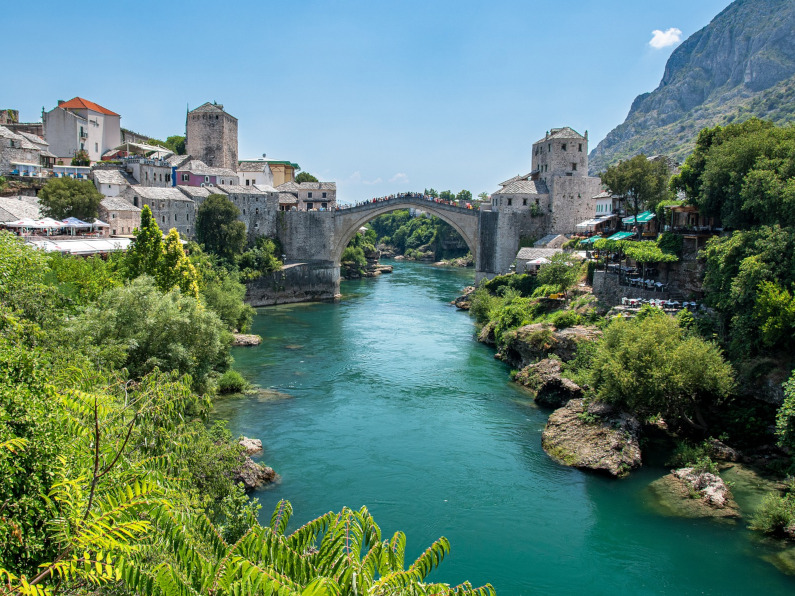 Mostar is one of the most beautiful towns in Bosnia and Herzegovina. It is a place where western and eastern influences blend. Although the town is famous for its iconic Ottoman bridge across the Neretva River, Mostar has much more to offer. In this old town in Herzegovina, you will find not only mosques (which are great in number) but also Catholic and Orthodox churches, as well as a Jewish synagogue.

In this lovely city, you can also visit one of the traditional Ottoman residences, the Old Bazaar with traditional craft shops and even a Turkish bath. If you’re lucky, you might even see one of the divers who jump from the bridge into the Neretva River!

Medjugorje is a little town in Herzegovina and a popular Catholic pilgrimage site. The site got popular due to the alleged series of apparitions of the Virgin Mary to the local children back in the 1980s. Ever since then, it receives pilgrims from all over the world who come to pray to Our Lady of Medjugorje.

Apart from the Apparition Hill itself, pilgrims can visit the Church of St. James, located beneath the hill, where the Holy Mass is served in Croatian and several other languages, and the Cross Mountain where the believers can pray the Way of the Cross while climbing. 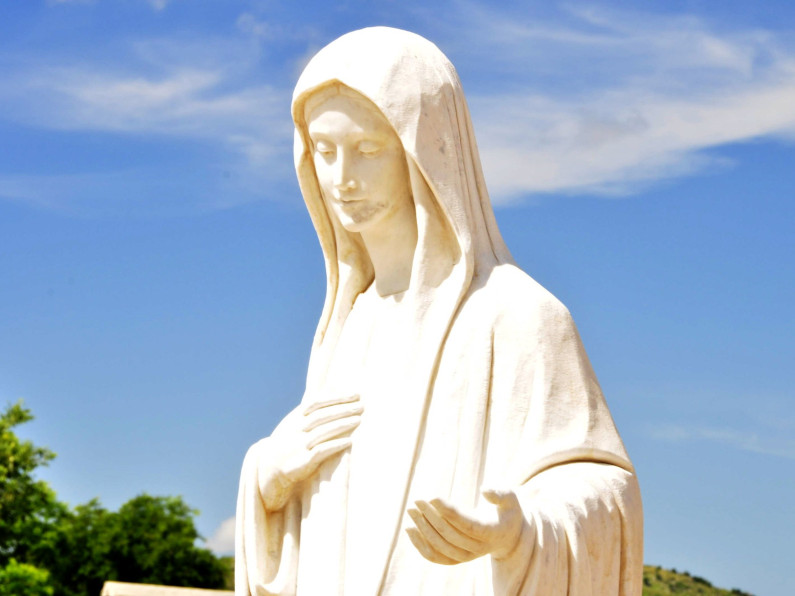 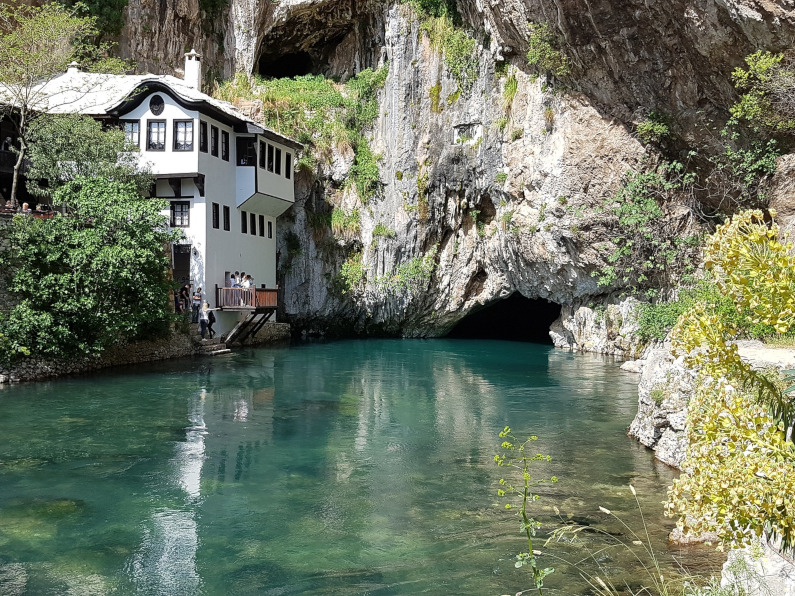 Blagaj is a lovely little village in the region of Herzegovina. The main attraction of the area is the Tekke Blagaj, a historical Dervish monastery. The 600 years old monastery was build under the 200-meters-high cliff, right at the Buna River spring.

Above the spring, on the top of the hill, you can visit the Blagaj Fort, the old fortress complex built in the 10th century, also known as Stjepan Grad. Apart from visiting these sites, you can also take a walk through the historical streets of Blagaj or enjoy a meal and a coffee by the river.

Although it is mostly separated from the Adriatic Sea by the Croatian territory, Bosnia and Herzegovina does have an exit to the sea at the town of Neum. The 9 km long Neum Riviera splits Croatian territory, dividing the Dubrovnik County from the rest of the country. This is why anyone who is traveling by car to the south of Croatia must exit and enter Croatia once again.

The Neum Bay, although small, offers everything you may need for a seaside holiday. With its sandy beaches and large hotel chains, Neum offers attractive prices, lower than on the Croatian coast. Besides the coast, the rest of the area is mostly covered in steep hills. 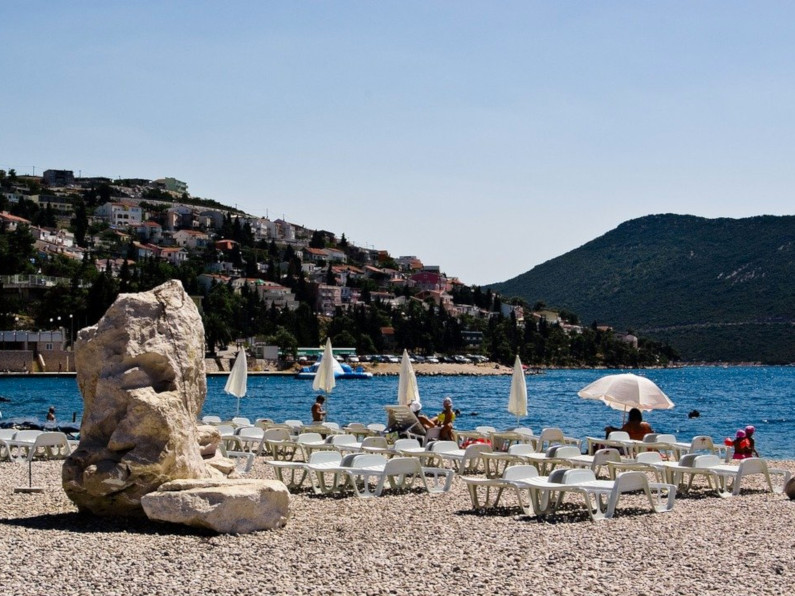 Natural wonders of Bosnia and Herzegovina

Bosnia and Herzegovina is a mountainous country, with fast rivers ideal for rafting or kayaking. 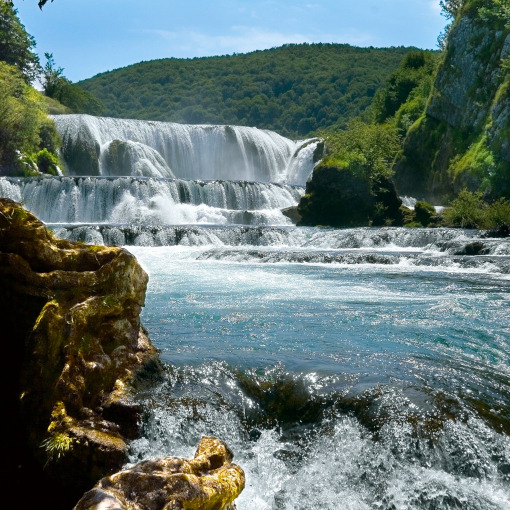 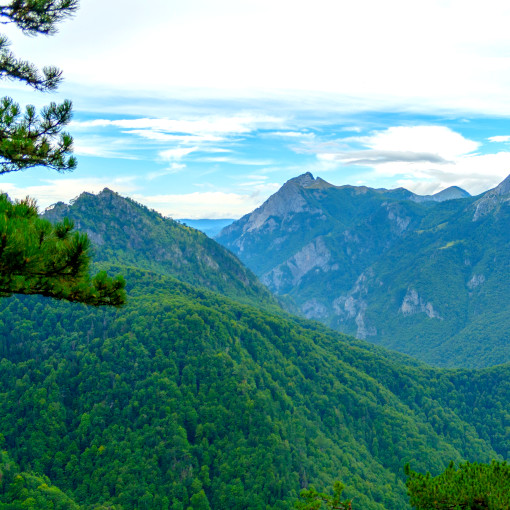 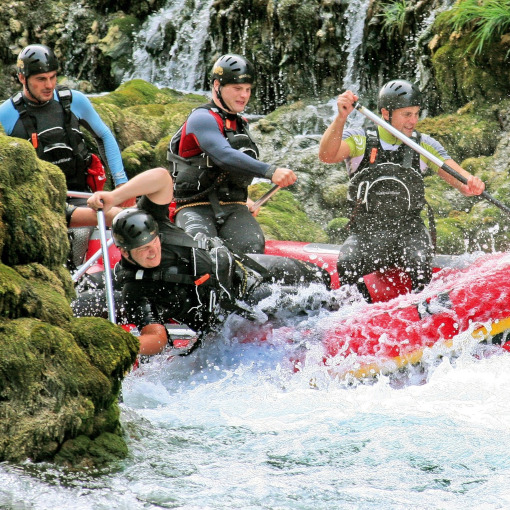 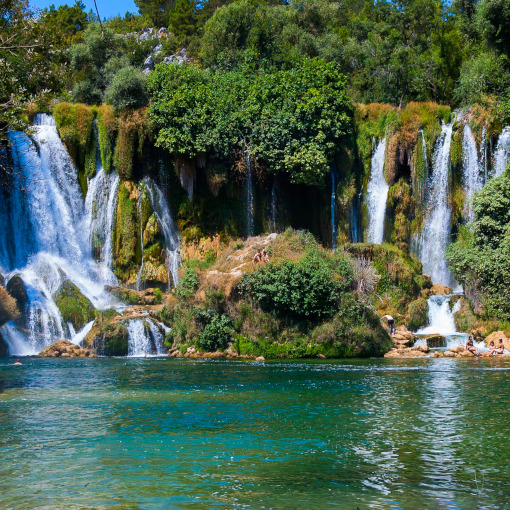 Una National Park stretches along the valley of the upper course of the Una River and the canyon of its tributaries. The park is located in the western part of Bosnia and Herzegovina, close to the Croatian border. Although this is a protected area, rafting, kayaking, and canoeing are permitted on the Una River. This way, the visitors can explore the natural sights of the park and have fun doing it. Besides the natural attractions, the park area includes several medieval towns.

Sutjeska National Park is the oldest national park in the country. The highest peak of the park is Maglić, with a height of more than 2.000 meters. The park area offers a great diversity of flora and fauna. There are more than 300 birds, alongside bears and deer, living in the area. One of the most common activities the park has to offer is hiking. There are trails of up to 8 hours and 22 km for more experienced hikers. Another option is exploring the park by bike. The bike trails have a total of 48 km.

Tara River Canyon is one of the deepest river canyons in Europe. The canyon stretches from Montenegro to Bosnia and Herzegovina, over 82 kilometers, forming a border between the two countries. It is approximately 1.300 meters deep. The Tara River is a popular rafting route, due to the great rapids. Apart from being a popular water sports area, the canyon offers beautiful scenery, as well. This is mostly because of the more than 40 cascades falling down from the canyon peaks.

The most beautiful natural phenomenon of the Herzegovina region is the Kravica Waterfall. The waterfall was formed by the travertine river Trebižat. The height of the waterfall ranges from 26 to 28 meters, while the water below the waterfall forms a magnificent amphitheater with a diameter of 120 meters. Kravica Waterfall is located only 10 km from Medjugorje, so it is a great stop on your way to (or from) Medjugorje and Mostar.

About Bosnia and Herzegovina

Bosnia and Herzegovina is a country in Southeast Europe, located within the Balkan region. It is bordered by Serbia, Montenegro, and Croatia. The capital and the largest city is Sarajevo, located in the heart of the country.

The two entities are home to three main ethnic groups. Bosniaks are the largest group of the three, with Serbs second, and Croats third. A native of Bosnia and Herzegovina, regardless of ethnicity, is usually identified as a Bosnian. The country has a total population of 3.5 million inhabitants. The capital, Sarajevo, has a little less than 400.000 residents.

Although Bosnia’s constitution does not specify any official languages, the three languages in use, depending on ethnicity, are Bosniak, Serbian, and Croatian. Islam is the majority faith in Bosnia and Herzegovina, followed by Christianity (Serbian Orthodox Church and Roman Catholic Church). 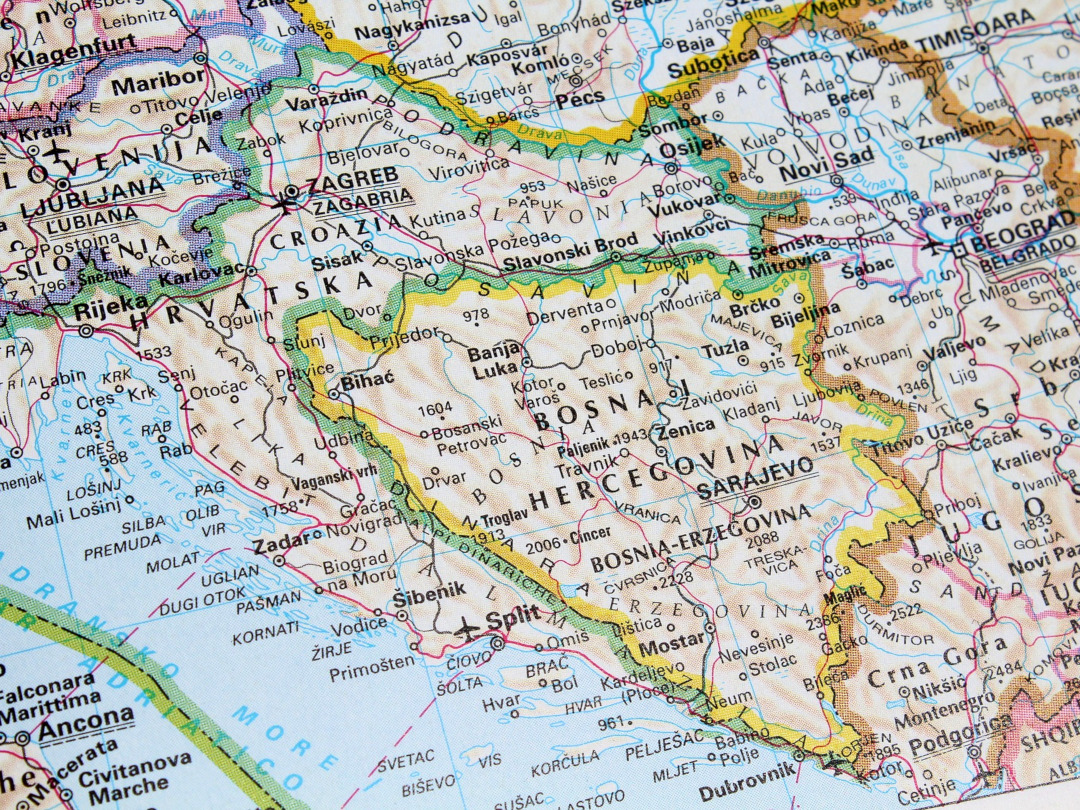 The basic itinerary, including the most popular destinations, is as following:

For those who are staying in the country for a week, we suggest the following itinerary: 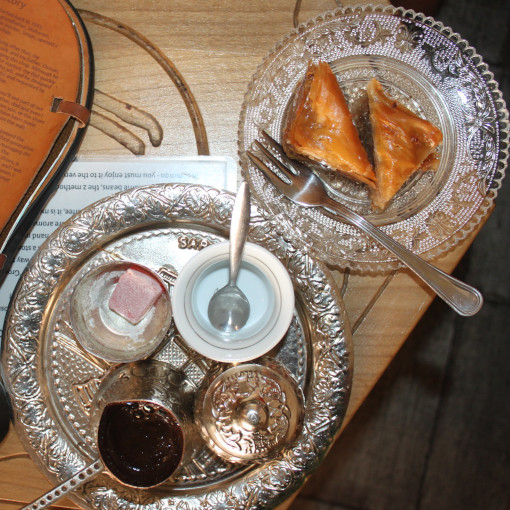 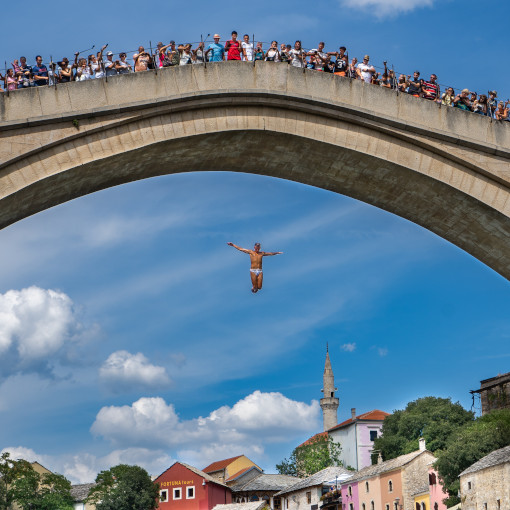 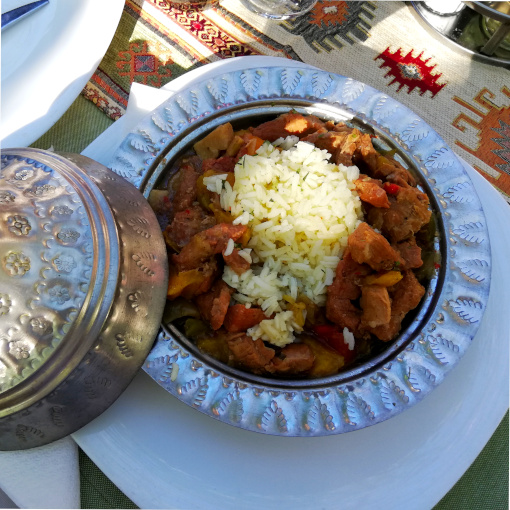 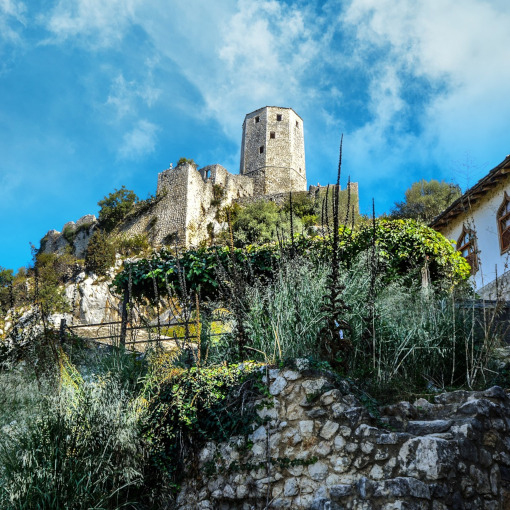 The traditional Bosnian cuisine is a blend of Turkish and Balkan influences. This results in a variety of interesting and tasty meals. Because of the Turkish influence, which wasn’t present in other countries in the region, Bosnian cuisine has some of the unique specialties.

One of the most popular Bosnian dishes is ćevapi (grilled dish of minced meat). Traditionally, ćevapi comes with somun (a specific type of bread) and chopped onions. Other national dishes are dolma (vegetable stuffed with either meat or rice) and japrak (minced meat wrapped in leaves).

If you want to grab something on the way, go with burek. It’s a meat-filled pastry, rolled in a spiral, usually served with yogurt. The meat can be replaced with cheese, potato, or cabbage. The one filled with cottage cheese is called sirnica, the one with potatoes krumpiruša, and the one with cabbage zeljanica. All these varieties are generically referred to as pita (Bosnian word for “pie”). This might not be typical street food, but it sure pays off to try it. If you prefer sweets, try baklava (sweet pastry filled with chopped nuts, topped with syrup).

When it comes to beverages, it is important to mention Bosnian coffee. The country has a strong coffee culture, due to the many years that it has spent under the Ottoman influence. Bosnians have a specific way of making coffee, but what is more intriguing is the way they drink it. Coffee is always served on a copper tray in džezva (coffee pot) and fildžan (cup). It is also mandatory to serve sugar cubes, a glass of water, and Rahat Lokum (a.k.a. Turkish Delight). First, you take a sugar cube, dip it in coffee, take a bite, and finally take a sip of the black coffee. This way you will get the most of its rich flavor. 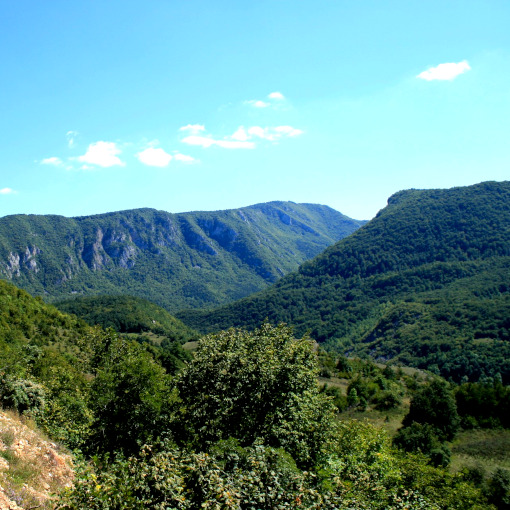 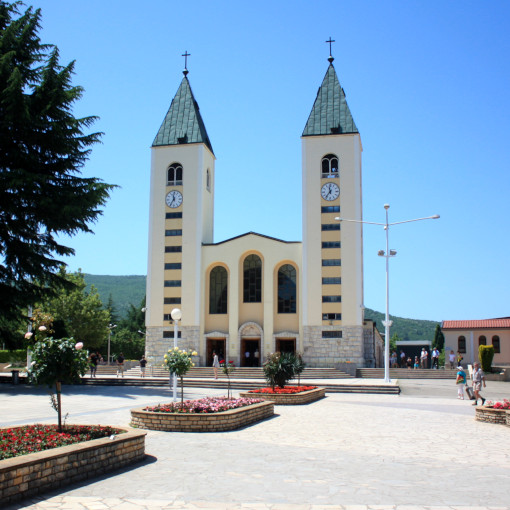 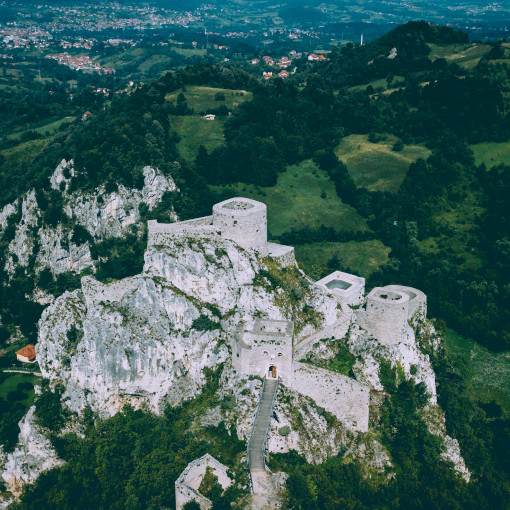 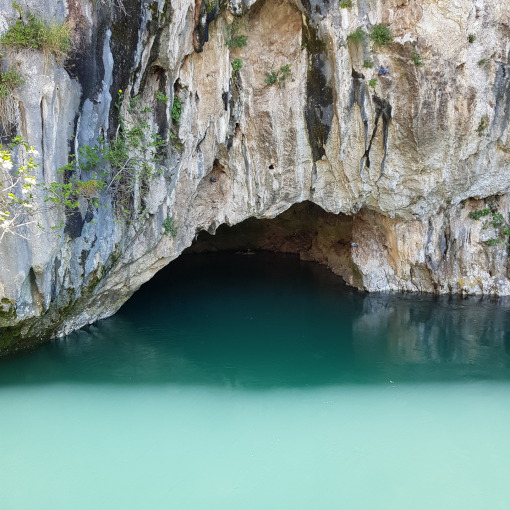 Weather in Bosnia and Herzegovina

Bosnia and Herzegovina, as the name of the country says, is geographically divided into two regions. The inland, Bosnia, is a geographically larger region and has a moderate continental climate, with hot summers and cold and snowy winters. The cold is even more intense in the mountains that are common in the area, particularly around Sarajevo.

The southern region, Herzegovina, has a Mediterranean climate, due to the proximity of the sea. This means that winters are milder, and snow is not that common. On the other hand, summers tend to be very hot.

Visa regime in Bosnia and Herzegovina:
EU, American and Canadian citizens do not require a visa to enter the country, all they need is a valid passport. People of other nationalities should check with their embassies before traveling to Bosnia.

It is advisable to exchange your money before entering the country (1 EUR = 1,95 KM ). While major cities have exchange offices and ATM machines, this is not the case in smaller towns. Many shops and restaurant will accept payment in Euro, using a 1 to 2 ratio, but paying by card is not always possible.

Depending on the region, religious holidays such as Easter, Christmas, and Eid al-Adha, are also non-working days.

Bosnia and Herzegovina tourism – The best of the country! was last modified: April 29th, 2022 by Marilia Oliveira