The most beautiful town of Bosnia and Herzegovina
;

Mostar is most likely the most beautiful town in Bosnia and Herzegovina. Located in the south of the country, Mostar is a reminder of the old times. The town is famous for the iconic bridge across the Neretva river, which attracts more and more people every year. But Mostar is more than that – find out why!

What to see in Mostar

How to get to Mostar

Where to eat in Mostar

What to visit near Mostar

Herzegovina is a geographical region in the southern part of Bosnia and Herzegovina, close to the Croatian border. Since it is located close to the Adriatic Sea, Herzegovina has a mild Mediterranean climate, which also differs it from the rest of Bosnia. It’s in Herzegovina that you will find the best Bosnian wines and different kinds of fruit. Also, because of both Mediterranean and Islamic influence, Herzegovina offers a unique and unforgettable gastronomic experience.

The Herzegovina region is also a historical region full of ancient towns and beautiful architecture. Since Bosnia and Herzegovina was a part of Ottoman Empire for 400 years, it’s here that Islamic, Catholic and Orthodox influences melt. More recently, during the Bosnian war, the entire country was severely damaged, what we can still witness today.

The “capital” of this region is Mostar, famous for its bridge across the Neretva river. Mostar is the most visited place in Herzegovina, along with Medjugorje, a Catholic pilgrimage destination. Near Mostar and Medjugorje there is also the old town of Blagaj with the beautiful Dervish house, as well as Počitelj, a medieval town built in stone. Herzegovina even has a small portion of the Adriatic coast where the town of Neum is located.

Mostar is located in Herzegovina, the south region of Bosnia and Herzegovina. Close to the border with Croatia, only 130km from Sarajevo or Dubrovnik and 170km from Split.

What to see in Mostar

The town of Mostar is a cultural center of the region and one of the most beautiful towns in Bosnia and Herzegovina. The name Mostar comes from the word most, which means bridge, and it can be translated as “The bridge keeper”. Although the town is famous for its iconic bridge across the Neretva river, Mostar has much more to offer. In this old town in Herzegovina, you will find not only mosques (which are great in number) but also Catholic and Orthodox churches, as well as a Jewish synagogue. The diversity of western and eastern architectural styles can be seen all around town – Islamic architecture and buildings from the Austrian-Hungarian period blend and make Mostar unique and beautiful. 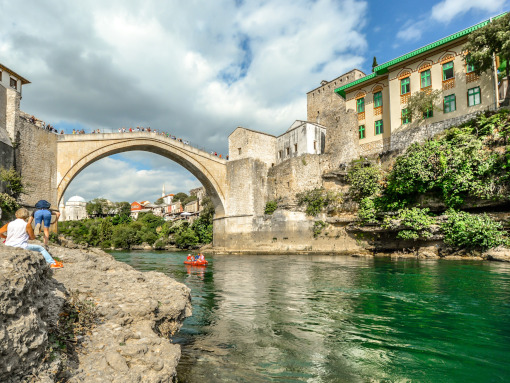 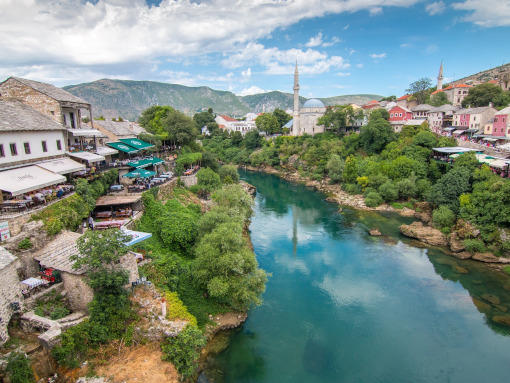 Stari most (The Old Bridge)

The Old Bridge is the symbol of Mostar and its most attractive feature. It is a stone bridge built back in the 16th century, during the rule of Suleiman the Magnificent, when Bosnia and Herzegovina was part of the Ottoman Empire.

The bridge is an extraordinary example of Balkan Islamic architecture. With its beautiful arch, it spans over the Neretva river on a height of 24 meters. It is a 30m long and 4m wide bridge, with stone-built towers on both ends.
The Old Bridge stood unharmed for more than 400 years, until 1993 when it was destroyed during the war in Bosnia. Ten years after the war the Old Bridge was completely reconstructed on the same spot and using the same antique method the original builders used almost 500 years ago.

Today, the Old Bridge is a most recognizable symbol of Mostar and a reminder of the town’s rich history. Many tourists visit the site year after year and witness the brave men jump from the top of the bridge to the depths of Neretva river. 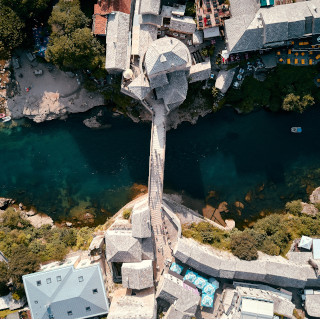 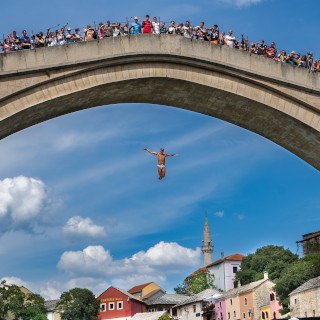 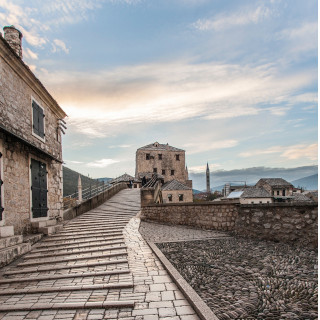 The two towers, called Tara and Halebija, stand on the opposite sides of the river, one on each end of the Old Bridge. The towers date back to the 17th century and were used as watchtowers, prison, and ammunition storage. Today, the Tara tower houses the Museum of the Old Bridge, which is open for a visit from Tuesday to Sunday, from 10.00 am. to 6.00 pm.

When you cross the bridge and pass the Tara tower, you will find yourself in a lively street. Kujundžiluk is one of the oldest parts of the town. Located in the very center of Mostar, this old bazaar is a place where you can find traditional craft shops and restaurants. In the Ottoman era, it was a spot where all the business was done – 500 workshops were located here! Luckily for us, Kujundžiluk has remained almost unchanged till this day. It still has the charm of the old times. 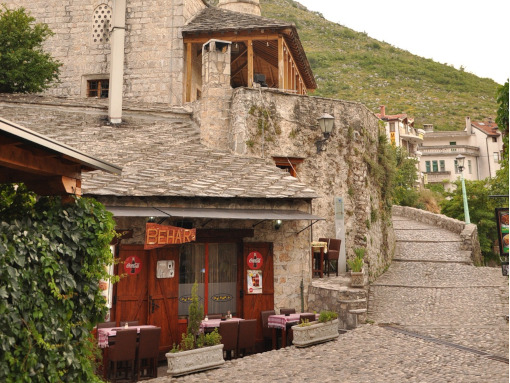 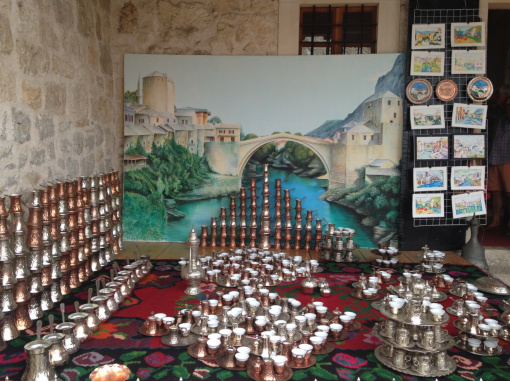 Not far from the bridge, the traditional Turkish bath is located. The use of public baths was a common practice in the Ottoman era. The bath in Mostar was built in the 17th century in a traditional architectural style and it is a rare example of such a bath in this region. At the end of the Ottoman era, the Bath was put out of use but was later restored and today it is used for cultural events or exhibitions.

In Mostar, you can visit traditional Ottoman residences to see what life was like in this area during the Ottoman era. Bišćević, Kajtaz and Muslibegović residences once belonged to the prominent local families. Today, they are open to visitors. By visiting one of the residences you will get the inside look of the daily life people once had, but you will also learn a little bit about the architecture and decorations they used.

In the town of Mostar, you will see many beautiful mosques that date back to the Ottoman period. Some mosques can even be visited by tourists. One of those is the Koski Mehmed Pasha Mosque. Located in the heart of the city, near the Neretva river, this mosque is open to visit even for the non-Muslim visitors. Not only will you see the interior of the mosque and its courtyard, but you can also climb up the minaret tower and enjoy the view of the town. 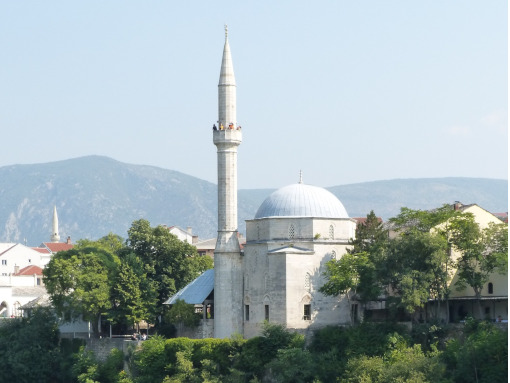 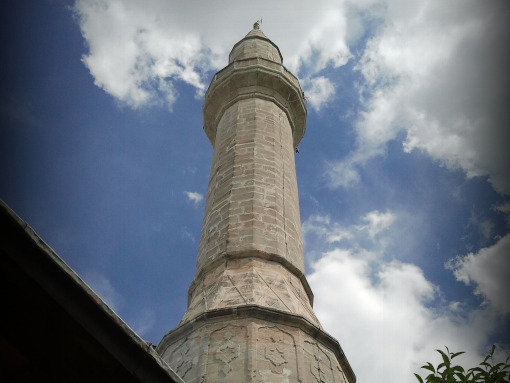 Apart from all the buildings and monuments from the Ottoman period, there are also some nice examples built during the Austrian-Hungarian period, such as the Bishop’s palace. You can also visit the Franciscan Church and Monastery, which were built while Bosnia and Herzegovina was still under the Ottoman rule. Along with mosques and catholic churches, there is an Orthodox church in town, as well as a synagogue. And for those that would like to profound their knowledge, there are Museum of Herzegovina and Museum of War and Genocide Victims available.

In summer months, when many tourists visit the town, you can witness the divers jump from the bridge to the Neretva river. They usually wait for the crowd to gather and chip-in, and then they “perform”.

Visit Mostar with a private guide

If you want to visit Mostar, get in touch and book a day trip with a private escort guide in english or other language!

How to get to Mostar

Mostar is accessible by plane, bus, train or car. The Mostar’s airport is only 15 minutes by car from the city center, but there are also airports in Sarajevo, Split, and Dubrovnik, all within a 2,5h drive from Mostar. If you prefer something cheaper, consider taking a bus. A train is also an option, but since the railway hasn’t been modernized yet, it would take you a while to get to your destination.

How to get to Mostar from Split

You will need approximately 2 hours to get from Split to Mostar. The easiest way is to take a highway A1/E65 leading to the border crossing of Bijača, where you will enter Bosnia and Herzegovina. After the border, you will continue on the A1 to the toll station Zvirovići. Next, take the state road R425a, following the signs for Medjugorje/Mostar. After you pass Medjugorje, continue on R424/R425 following the signs.

How to get to Mostar from Dubrovnik

The ride from Dubrovnik to Mostar takes about 2,5h by car. After leaving Dubrovnik, take the state road D8 all the way to Opuzen. Next, take the right exit for Sarajevo/Mostar and continue to the border crossing Metković. After passing the border, continue on the M17 following the signs for Mostar.

How to get to Mostar from Sarajevo

When heading from Sarajevo to Mostar, get on M18 and then turn left to A1, following directions for Mostar. Stay on A1 until you reach the toll station Tarčin. Next, turn right to E73/M17 and continue all the way to Mostar. It would take you approximately 2 hours to reach your destination. 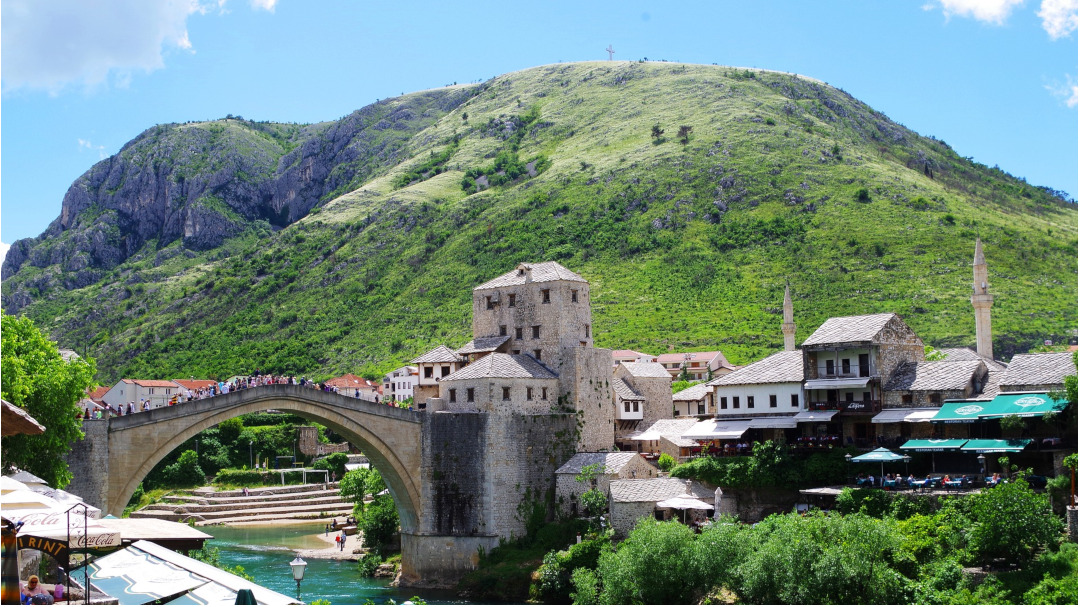 Bosnia and Herzegovina is still developing its highway network, so pay attention while taking the regional roads. Due to the roads condition your trip may take a little longer than you expected. For the same reason, depending on the traffic, it might be good to stay at the Croatian side of the border as long as possible. It may seem a longer way, but you will actually save time since the roads are better.

Where to eat in Mostar

Bosnia and Herzegovina is well known for its delicious food. The traditional Bosnian cuisine is a blend of Turkish and Balkan influences, which result in interesting and tasty meals. If you are staying in Croatia and only visiting Mostar, make sure you leave enough time to have lunch in Mostar, because it’s something completely different.

Some of the specialties have spread across all the region, such as ćevapi (grilled dish of minced meat), but you will still find the best ones in Bosnia. Another national dish you can try is dolma, a vegetable stuffed with either meat or rice, or japrak, minced meat wrapped in leaves.

Probably the most famous restaurant in Mostar is Šadrvan, a centrally located traditional restaurant. At Šadrvan you can try all the above-mentioned specialties while being served by waiters wearing traditional Bosnian clothes. The authenticity can also be seen in a beautiful interior design inspired by national culture. 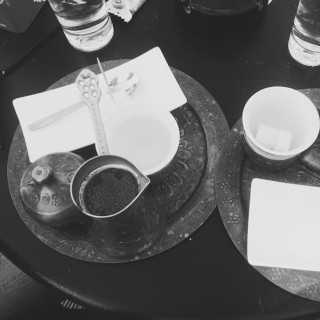 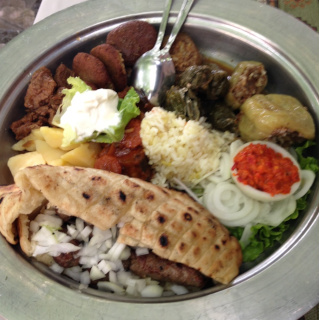 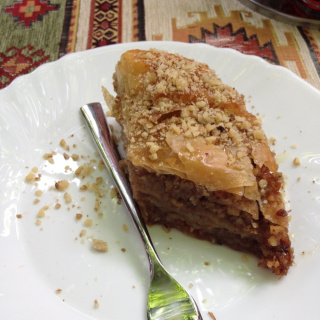 Please note that, due to its popularity, Šadrvan gets very busy, especially in the summer months. So be prepared to wait a little longer for your meal to come.

What to visit near Mostar

Blagaj is a village located only 20 minutes from Mostar. There are several sites you can visit here. One of those is the Tekke Blagaj, historical Dervish monastery, located at the Buna river spring, under the hill. Above the spring, on the top of the hill, you can visit the Blagaj fort, the old fortress complex built in the 10th century, also known as Stjepan Grad. Apart from visiting these sites, you can also take a walk through historical streets of Blagaj or enjoy a meal or a coffee by the river. 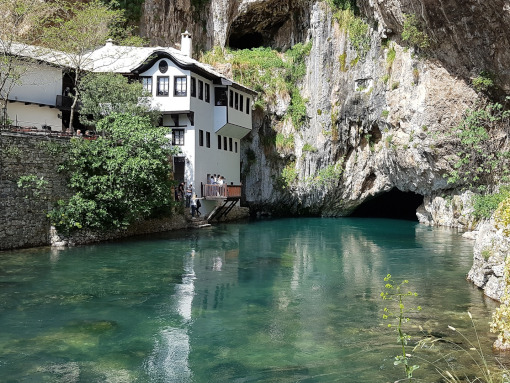 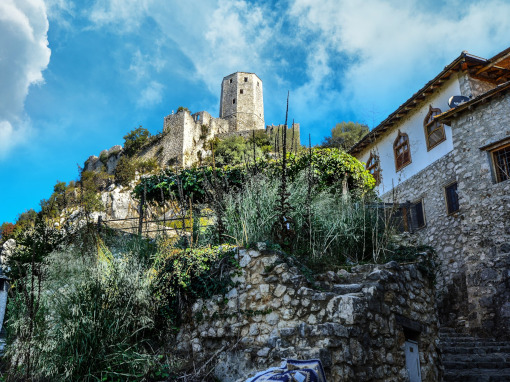 About half an hour drive from Mostar, there is another historical village called Počitelj. Počitelj houses yet another fort on a hill, overlooking the village and a river beneath it. Closer to the river you will find Sahat Kula, the bell tower, and the Šišman Ibrahim Pasha Mosque. An entire village is made out of stone, using a traditional way of building. All in all, Počitelj is a nice place ideal for a half-day visit.

While in the Herzegovina region, you may also visit Medjugorje, the popular Catholic pilgrimage site. The site got popular due to the alleged series of apparitions of the Virgin Mary to the local children back in the 1980s. Apart from the Apparition Hill itself, you can visit the Church of St. James, located beneath the hill, where the Holy Mass is served in Croatian language, but also in other languages. 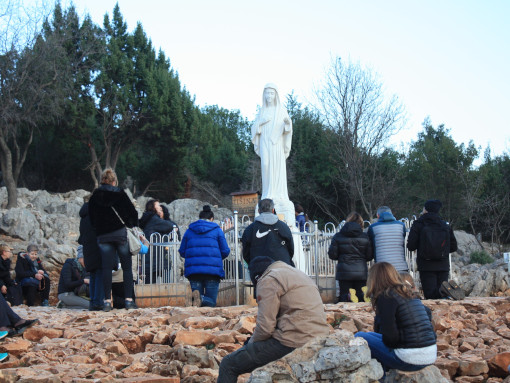 Marzito organizes day-trips or transfers to Mostar from Split and Dubrovnik, or any other town. Check our offers here!

For more information and offers, feel free to contact us!